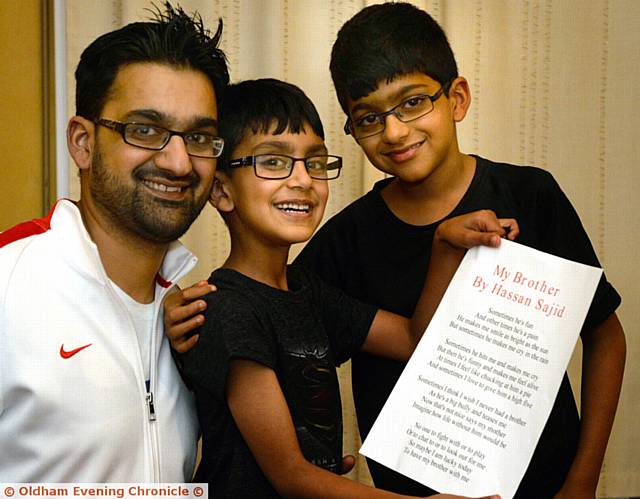 A SCHOOLBOY from Oldham has been shortlisted for the Young Muslim Writers Awards 2016.

Hassan Sajid (7), from the Coppice, impressed the judges with his poem entitled My Brother, about his older sibling.

The submission, which comprises his reflections on what it is like to have a brother, was one of 300 entries for the competition for five to 16-year-olds.

The awards, in their sixth year, focus on raising the standards of child literacy and creative writing. St Thomas Primary School pupil Hassan, who was whittled down to the final 40 competitors, said in his poem: "Sometimes he's fun and other times he's a pain.

"He makes me smile as bright as the sun but sometimes he makes me cry in the rain."

He describes his older brother Raihaan Sajid (10) as a "big bully" but then realises that without him, he would have no one to play with, talk to or look out for him, and he decides he is "lucky".

Along with is family, Hassan will attend a special ceremony at London's Senate House on Saturday, December 3 where the finalists will be selected.

Dad Sajid Iqbal, who encouraged both sons to enter the competition, said: "Hassan is absolutely chuffed.

"When I asked him if he wanted to take part he said he would win.

"He was really ambitious.

"When I got the email I was really shocked but he was saying he told me so.

"We are all excited to go down to London.

"For the kids, and especially Hassan, this is an exciting journey."

While Raihaan enjoys football and television, his younger sibling was described by his dad as "a thinker who likes to use his imagination."

My Brother was entered in the five-to-seven-year-old category of Key Stage 1 Poetry and assessed by an internationally-renowned panel of judges including Young People's Laureate for London, Caleb Femi.

The Young Muslim Writers Awards is a Muslim Hands project which takes place in partnership with the Yusuf Islam Foundation.

Writers from across the four Key Stages, between ages five and 16, are invited to submit work in the short story or poetry categories.

Award-winning author SF Said will be among those presenting trophies to the winners.

Events and marketing coordinator Reem Abu-Hayyeh said: "Hassan's poem My Brother is representative of the way in which children respond imaginatively to their lives and surroundings, reminding us that it is important to encourage this creativity.

"The judges commented on the honesty of his poem and the beauty of its sentiment and the imagery used."

Entries for the 2017 competition can be made at muslimwritersawards.submittable.com/submit