You are Here: Home » News » Learning to serve community 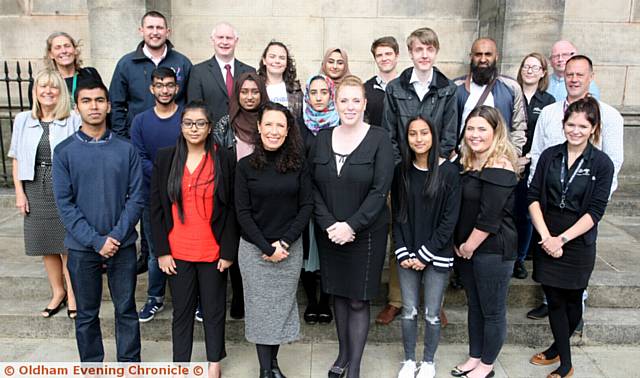 Ms Rayner was the guest at a graduation ceremony held at the end of the two-week Working For Your Community summer school, which is designed to give youngsters a taste of community, voluntary and political work.

The Labour MP, who is also Shadow Education Secretary, awarded the students summer school graduation certificates and said: "Politics is about people and, hopefully, you've picked that up over the last two weeks at Debbie's summer school.

"When I was a home help worker and I helped someone to bed or made their tea, that meant just as much as what I do now as a Shadow Secretary of State for Education. No matter what you do in public service it is an absolute honour to do it.

"To help somebody and to have the privilege of someone putting their trust in you is a really big and amazing thing.

"By taking part in Debbie's summer school you have made the first step and hopefully you will all go on to do amazing things in the future."

She said: "I really loved the summer school. The first week was great, learning the theory behind community work and getting a glimpse behind the scenes at Parliament and how an MP's office works.

"The second week was really practical and it was great to work with Bryn Hughes on the marketing activity for the Nicola Hughes Memorial Fund.

"My role was to do market research for the next fundraising idea, which will result in four children who have been victims of crime being funded through university.

"It's a great feeling to think you can help make such a difference to people's lives.

"The summer school has really helped me understand the importance of working in your community, especially as I'm considering a career in politics in the future."

After the presentation, Bryn Hughes, founder and trustee of the PC Nicola Hughes Memorial Fund, said: "It's great for us to host summer school students on placements because they are young people who are really keen to give something back to their community and they do it with a real sense if pride. It gives us a real sense of achievement."

Debbie Abrahams said: "What I love about my summer schools is that the students get to broaden their experiences and learn how they can make a difference in their own communities. I also get a boost from meeting such great young people who are so full of energy and enthusiasm. It gives me so much hope for our future.

"I'd like to say a big thank you to the many local organisations who have hosted the students and given them such valuable hands-on experience of working in the community."