You are Here: Home » News » Flipping burgers with the President

Flipping burgers with the President 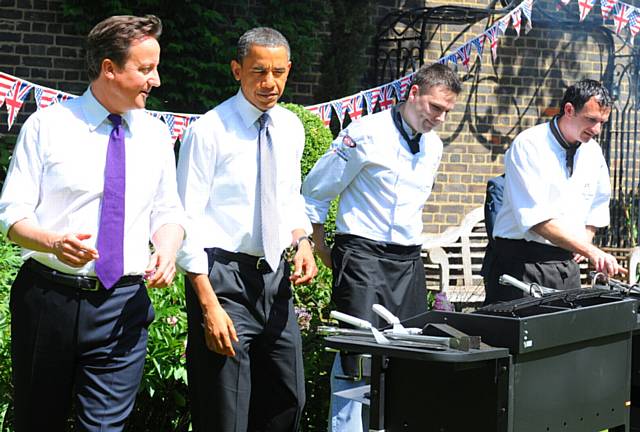 HE'S flipped burgers with US president Barack Obama and cooked for the Queen.

And now the Crompton House pupil turned head chef for the Prime Minister at Chequers has represented the UK at the annual "G20 of gastronomy" in Canada.

Graham Howarth even appeared on breakfast TV during the gathering of chefs of heads of states in Toronto, Ottawa and Montreal and said: "Normally I wouldn't go, it would be the royal chef, but he couldn't make it, so I got asked if I fancied an all-expenses trip to Canada."

It's a long way from the bakery department at Tameside College of Technology where Graham studied.

"From a very young boy I was always messing about in the kitchen," he said. "My mum encouraged me to do quite a lot of baking so that's where it came from."

The 45-year-old, from Shaw, spent the next 13 years as a chef in the RAF which took him to the Falklands, Cyprus and Belgium.

"I started at the bottom in the mess and gradually worked my way up to private residences cooking for high-ranking officers," he said.

The job at Chequers, the PM's country house, followed in 2002 and Graham has worked for Tony Blair, Gordon Brown, George Osbourne and Theresa May.

"It is so varied. One weekend you can be cooking for the family and the next weekend it is the Queen coming to lunch," he added.

"Obama was cool when I met him. I grilled with him for half an hour in the grounds of Downing Street at a barbecue for US and UK service personnel; his sleeves were rolled up and he flipped a few burgers."

But Graham revealed that it is not all haute cuisine. And although Graham is not allowed to say what a PM's favourite dish is, he admitted: "In essence, Chequers is a house where they come to chill out, forget about everything.

"They don't always want to be eating high-end, fine food because that's what they tend to eat when they are out being entertained. Sometimes they just want to kick back and eat comfort food."

Graham lives in Buckinghamshire with his wife Jayne, SEN manager at Buckinghamshire County Council. The couple have three sons - Andrew (23), a prison officer, Lee (21) ,who is on a football scholarship in the US, and Christopher (19), who is studying football journalism.

Graham still has family in Oldham and watches Latics when they play near him.

Le Club des Chefs des Chefswas founded in 1977 and its annual grand assembly brings together the chefs of heads of state to meet and discuss their work.

It is an opportunity for them to find out what it is like to be looked after for a change, and the Canada gathering included a Niagara Falls cruise as the guests as the Mayor.

But visiting a foodbank, a cookery school and La Tablée des Chefs project, which feeds children below the poverty line with foods hotels and markets can no longer use, were also on the packed itinerary.

Graham was interviewed on Canadian breakfast TV show Your Morning by Ben Mulroney, son of the former PM Brian Mulroney, and said: "It was very busy. There was so much going on, but it was a good opportunity to get together with different chefs and swap contacts."