You are Here: Home » News » Swan jape was science fiction 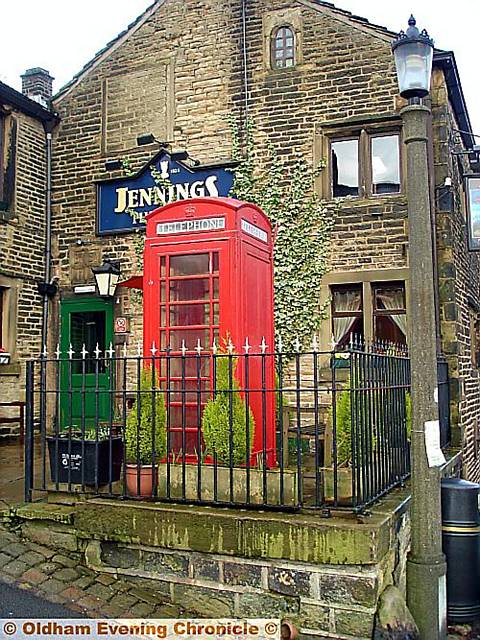 REAL THING: the red phone box outside The Swan

A LANDMARK phone box in one of Saddleworth’s prettiest villages was at the centre of an April Fool’s hoax.

The familiar red phone is a feature outside The Swan in the square at Dobcross.

But the Dobcross Diary, which circulates among villagers, started tongues wagging when it announced the box was to be replaced by a Dr Who- style blue police box.

Diary editor Michael Powis said in a story: “Once a familiar sight in Britain, the blue police boxes are being rolled out in mainly rural villages as part of the Government’s Local Policing Pledge initiative.

“It will also house a speed camera, CCTV with the latest face recognition technology and a ‘decibelometer’ in case anyone talks too loudly on the bench outside.”

But the joke starts to unfold when the story says the box will have a kettle so bobbies can enjoy their refreshment breaks.

And it goes on to suggest, “in the spirit of community involvement, locals can post small cakes and biscuits through a specially-designed serving hatch if they spot an officer in residence.”

Mr Powis added: “We always try to be topical and as this Easter sees the debut of the new ‘Dr Who’ on the BBC, we thought the idea of a blue police box was a good starting point for a spoof story.

“The feedback so far is that most people enjoyed the joke.

“However, the penny was slower to drop for others.

“I have to say that the blue phone box idea does seem quite popular.

“One local businessman was initially outraged at the prospect of speed cameras being incorporated into the design.

“I have received inquiries wishing to find out what will happen to the old red phone box.

“As yet, nobody has come forward with a genuine Tom Baker butter dish though.

“Our local bobby e-mailed to confirm he does indeed have a preference for custard creams.

“And our MP, Phil Woolas, e-mailed saying how much he enjoyed it.”

Mr Powis said: “I wonder if Doctor Who fans will add Dobcross to their list of must-see destinations?

“They would certainly be given a warm welcome.”

Landlord Michael Mooney said: “It’s been a great talking point in the village — a brilliant stunt.”


DID you fall for any April Fool’s jokes? Send your stories to news@oldham-chronicle.co.uk