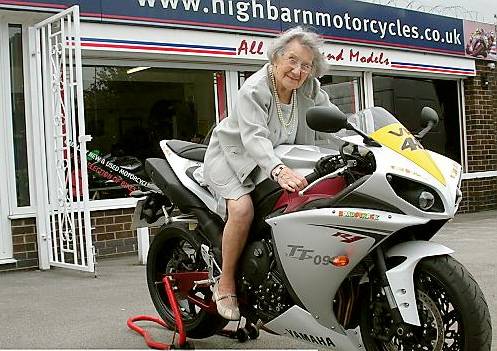 ON your bike . . . Hilda on the Yamaha ridden by Valentino Rossi

A BIKER gran marked her 102nd birthday today by revving the engine of a world-class motorbike.

And as an extra special birthday treat, her grand-daughter’s husband Steve Shaw (50), who owns Highbarn Motorcycles on Broadway, Chadderton, managed to get hold of the Yamaha 2009 YZF-R1, the bike that the nine- times world motorcycle champion raced round the Isle of Man TT circuit on during a parade lap last year.

Keen Hilda soon swapped her zimmer frame for the handle bars to pose for pictures on the powerful machine.

Since then, she has emerged as a keen MotoGP fan and regularly cheers for Rossi from her armchair.

Hilda’s daughter, Freda Eason (66), of Alpine Grove, Royton, said: “She really enjoyed getting on the motorbike and said ‘aren’t I lucky to be sitting on Rossi’s bike?’.

“When she goes to Steve’s house, she always cheers for Rossi.

“I know she loved getting on the bike.”

Hilda grew up in Pembroke Street, off Union Street West in Oldham. She went to St Thomas’s School in Werneth Hall Road but left at 13 to work in the cotton mills. She married Ellis Wright in her 30s, but he died 16 years ago.

Hilda loves to spend time with Freda and her husband Peter, as well as her two grandchildren.

She enjoys daily exercise and dominoes at High Barn Day Centre in Royton.

“She is a lovely person who gets on well with everyone.”