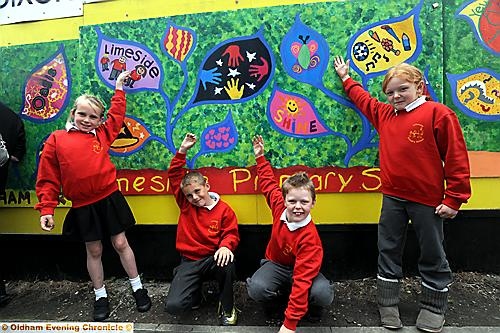 WE did this . . . Limeside pupils (from left) Ebony Ogden, Brooklyn Ward and Mathias and Maisy Newberry show off their work.

A MASSIVE piece of art created by a host of primary school children has been unveiled in Hollinwood.

The 147ft-long piece can been seen on the hoardings surrounding the construction site at the new Oasis Academy Oldham building on Hollins Road.

Local schools worked with with housing associations and community action groups to create the art work which celebrates all that is good about their neighbourhood and living in Oldham.

The project was designed by local artist Sarah Gartside and is based on the theme of vines to mark new growth and beginnings.

It was funded by the academy, together with Oldham Council, Willmott Dixon Construction Limited, Hollinwood councillor Jean Stretton and former councillor Keith Pendlebury.

Council leader Jim McMahon was among 150 guests who attended the unveiling.

He said: “This is a fantastic project that has brought the local community together.

“It will provide an eye-catching backdrop while the new Oasis Academy is under construction.

“I commend the efforts of everyone who has taken part.”

The new academy will open in September, 2012, replacing its current buildings in Chadderton and Hollinwood.

Principal John Alder said: “I cannot think of a better symbol of what Oasis and our academy stands for.