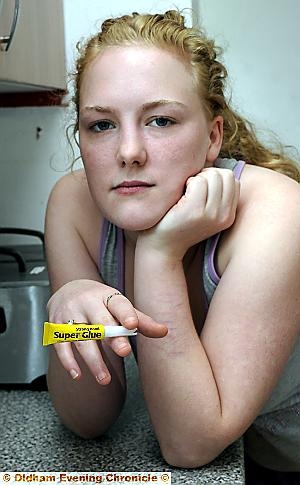 A WOMAN found herself in a sticky situation when she got superglued to her own kitchen worktop for 90 minutes.

Tina Ramsbottom (21) had been trying to repair a broken ornament at home in Hathershaw, when the fingers of her left hand became stuck together on Friday afternoon.

The mum-of-one went to another room to find her boy friend to show him what she had done and he was laughing, calling her an idiot.

But when she went back into the kitchen to put the superglue away, she touched the worktop with her glue-free hand, unaware that the sticky stuff had leaked from the tube and on to the surface. Three fingers of her right hand became stuck fast to the worktop.

She said: “I was totally stuck. I got my boy friend and we tried hot water to get me unstuck.

“We even tried putting a knife and a fork underneath my fingers but nothing worked. It was hurting as my nails were stuck so then we had to call 999.”

Hollins fire-fighters arrived and tried a couple of things to release Tina but eventually had to call paramedics in — who used an Internet search engine en route to find a solution. They read that acetone — found in nail-varnish remover — might do the trick so the fire men went round to neighbours to try to locate some quickly.

Paramedics used syringes to squirt the polish remover into tiny gaps between her fingers and the work surface.

Tina added: “The firemen had been there a while and said they were going to have to leave — and if I didn’t come unstuck in the next 10 minutes, they would have to cut the worktop and I’d go down to hospital like that!

Tina joked that she is usually a dab hand with glue as she does her false nails herself.