You are Here: Home » News » Labour raises concern over future of NHS 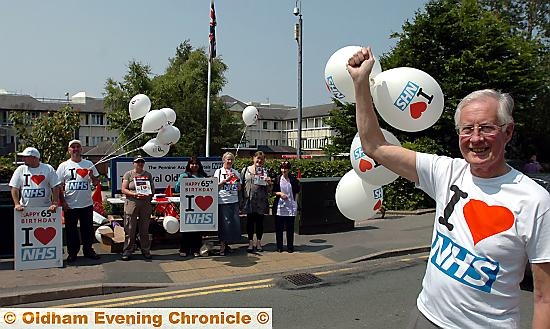 MANY happy returns . . . Michael Meacher helps the NHS to celebrate its 65th birthday at the Royal Oldham Hospital on Friday

LABOUR politicians pledged their support to the future of the NHS as the health service celebrated its 65th birthday.

The Unite union held a celebratory event outside the Royal Oldham Hospital on Friday to mark the occasion, complete with a birthday cake and balloons.

Members also used the opportunity to voice their concerns over what they call the “ongoing privatisation of our NHS under this Government” and were backed by Oldham’s MPs.

Oldham West and Royton MP Michael Meacher attended the event and said: “Most people do not fully realise what is going on with the awful changes in the NHS now because of the Health Bill.

“This government is overseeing massive cuts to our NHS. You can cut the fat but at some point you reach the bone. The Government is also turning it into a market-based system by opening it up to the private sector.”

Oldham East and Saddleworth MP Debbie Abrahams called for action to save the NHS — urging Oldhamers to campaign to ensure it is protected for future generations.

She said: “If we’re going to commemorate further milestones then we need to make sure our NHS is strengthened and protected.”