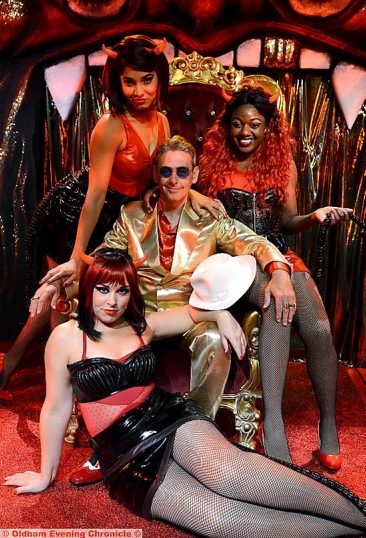 CULT 70s and 80s musical “Hot Stuff” has returned to Oldham Coliseum Theatre for the 25th anniversary of its world premiere.

The pop musical was initially devised as a sequel to “Hold Tight! It’s 60s Night” by the Coliseum’s former artistic director Paul Kerryson. The show opened at the Oldham Coliseum in November 1990 to rave reviews.

The show follows the Faust legend of a singer who sells his soul in exchange for fame, and majors in classic pop, rock and disco hits. At one point during his review of the opening night, the Guardian’s critic suggested, “it looked as though there might be a mass dance stampede” in the audience. Slade frontman Noddy Holder gave it a rave review too.

Over the years “Hot Stuff” has been performed in London’s West End, on national tours and in several revivals in Leicester, where Kerryson became artistic director after leaving the Coliseum.

The show’s return to the Coliseum has been directed by current artistic director Kevin Shaw.

Donning high-heels as “Lucy Fur” is Alan French, who is joined by a cast of six including Nicola Hawkins, who was last seen at the Coliseum in her Manchester Theatre Award-winning role in “Chicago”, plus a live four-piece band.

“Hot Stuff” runs at the Coliseum until September 26.


The Coliseum is in the running to win the UK’s Most Welcoming Theatre Award, which is decided by public vote between now and Friday, September 25. To vote, visit the website mytheatrematters.com