You are Here: Home » News » Serial dissident was so loved and respected

Serial dissident was so loved and respected 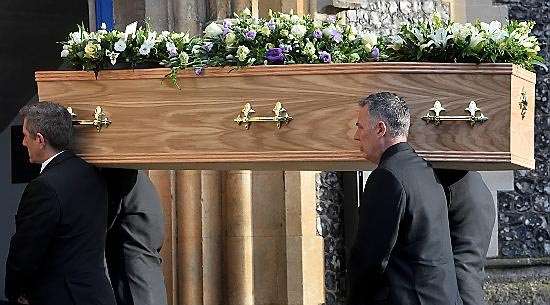 The coffin of former Labour MP Michael Meacher is carried into St Mary's Church in Wimbledon, London, ahead of his funeral.

KEY political figures, colleagues and friends of veteran Oldham MP Michael Meacher joined his family to pay their last respects to the Labour stalwart during his funeral on Friday.

The 75-year-old MP for Oldham West and Royton died on October 21 from a short illness after serving Oldham for 45 years.

His funeral was held at St Mary’s Church, Wimbledon Village, London, and was attended by the former Labour MP’s friends, family and colleagues.

In eulogies from family, friends and Reverend Mary Bide, Mr Meacher was described as a man of “great integrity” with “huge intellect and learning” and a “wonderfully dry sense of humour”.

The father of six and grandfather was elected to Parliament in 1970 and continued in the position for the next 45 years, during which time he acted as environment minister.

He wrote several political books, including one which he finished writing only days before he died and did not have time to publish.

His son David told mourners that even in the days before he died, his father insisted that he had to recover to “fight the tax credit cuts”.

He added: “He approached work and life with boundless enthusiasm.

“He would be moved to real anger and sorrow to hear about people who were suffering from benefit cuts. We will miss you terribly.”

Former Labour MP Chris Mullin also spoke and jokingly referred to Mr Meacher as a “serial dissident,” who was “razor sharp, had a boyish charm and a naivety that never left him”.

He said: “Almost to the day of his death he was thinking of ways to resist tax credit cuts and making plans. He never lost his radical streak or infectious good humour.”

Mourners arrived at the church to the sounds of Pachelbel’s Canon, Albinoni’s Adagio, Bach: Air On A G string, and joined in singing some of Mr Meacher’s favourite hymns, “Lord Of All Hopefulness”, “I Vow To Thee my Country” and “Thine Be The Glory”.

Donations were made to charities close to Mr Meacher’s heart — Amnesty International and Medecins Sans Frontieres.

He said: “He was a man I looked up to — a huge part of Oldham’s history and a very big part of its future. His dedication to the town’s regeneration was fantastic. Today hit hard and we realised he won’t be coming back.

“When the news of his death came it really hit the heart of a lot of people in Oldham, myself included.

“We are still grieving the loss of a very dear friend but he was a very religious man and he will be looking down on Oldham filled with pride.”

Oldham East and Saddleworth MP Mrs Abrahams also described it as a “day of mixed emotions”, celebrating his immense achievements in public life as well as mourning the loss of a friend and colleague.

She said: “Michael was, without doubt, one of the greatest advocates Oldham has ever had and will be remembered with much love and happy memories.

“I will miss Michael very much and my thoughts are with his family.”

She said: “Michael spent his life devoted to the Labour movement and our socialist values.

“His funeral brought together the entire Labour family, which was a fitting tribute in itself.

“It was an emotional day for all of us who knew Michael and what a gentleman he was. What I will remember most about him is the respectful way he treated everyone and his enduring commitment to socialist values.

“His funeral showed exactly how much he was loved and respected.”

Councillor Peter Dean, Mr Meacher’s PA and office manager, added that it was a “sad event” but one that celebrated his “remarkable life and work.”

He said: “It was a sensitive and moving ceremony with exceptional tributes to Michael. It was very well attended and everyone had a remarkable story to tell about Michael and how he had made a difference.”

He said: “Everyone was so full of praise for the work Michael has done and how committed he was to Oldham and the hard working people across the borough.

“He truly was a one off and he will be missed.”