You are Here: Home » News » Making Oldham a fairer place 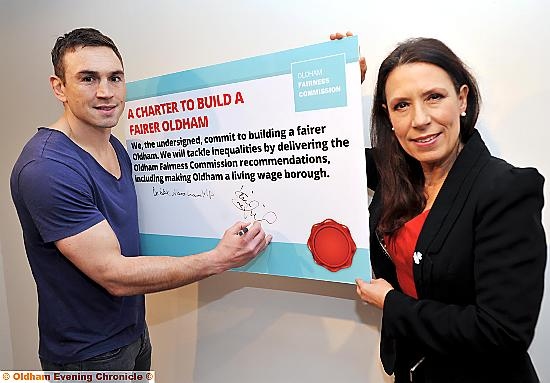 A PLAN to achieve a fairer Oldham was being revealed today.

The Oldham Fairness Commission, founded and chaired by Oldham East and Saddleworth MP Debbie Abrahams, held its final conference at Mahdlo as the commissioners publicly revealed plans for achieving a fairer Oldham.

The MP set up the commission in 2013 to identify issues contributing to local inequalities in education, employment and income. Mrs Abrahams was joined by commissioners representing a cross-section of local organisations from the public, voluntary and private sectors.

“Today’s conference is the culmination of months of hard work by the commissioners, and is their chance to share the draft roadmaps they have produced,” she said.

“These roadmaps define the what, when and how they will implement the OFC recommendations. Most importantly, there is the space for local people to engage with commissioners and comment on the proposals, so together we can build a fairer Oldham.

Support for the OFC has come from across the community, ranging from famous names such as rugby star Kevin Sinfield MBE, who says the commission will be “a huge benefit” for the town.

“It doesn’t matter what your background is, your chance to thrive should be the same wherever you come from,” she said.