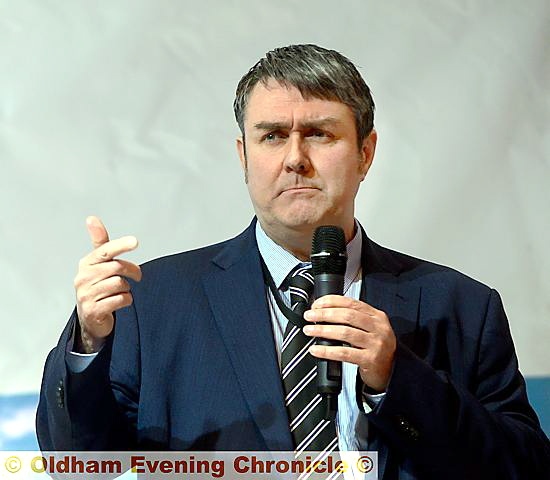 Dave Wells talks to the assembly

A SPECIAL conference yesterday saw community leaders grapple with ways to prevent young people being sucked into radicalisation and terrorism.

Tackling some of the misconceptions at a Featherstall Road banqueting hall was Dave Wells, the “Prevent” regional co-ordinator from the North-West Counter Terrorism Unit.

Organisers the Oldham Mosques Council wanted to come up with possible ways the Government might engage with Muslim communities to prevent terrorism. Speakers discussed Prevent — part of the Government’s counter-terrorism strategy — and why some Muslims consider it controversial.

Mr Wells explained how the strategy was another way to safeguard young people: “We’re aware there are critics of Prevent. Day-to-day we work very closely with partner groups, dealing with far right cases and working with all forms of ideologies. We’re not putting anybody on a list. Prevent is not about spying.

“While Prevent certainly isn’t perfect, what I see daily is communities and partners working really hard to try to understand radicalisation. We experience fantastic support from all communities. Muslim communities work very closely with us.”

Mr Wells spoke about the “Channel” programme - a voluntary deradicalisation process that helps those considered vulnerable to extremism.

Mr Wells also talked through the work NWCTU does to prevent people from travelling to Syria.

OMC development officer Mufti Helal Mahmood said: “We support and assist the Government in every possible way. None of our mosques advocate terrorism. We want to make it clear that the Oldham Muslim community is part of the wider community. People are angry. Equally Muslim people feel victimised. This is about strengthening the engagment of the Muslim community and work on preventing terrorism. Talk to us — we want you to talk to us to make us feel we’re part of the solution.”

“We must challenge extremism,” he said. “I really do want to stress that we really shouldn’t be in denial of extremism which is there among us. Young Muslims need to understand we live in a democratic society, which is very liberal. That is why we can talk and speak our minds and follow our religion.

He said sometimes Muslims were guilty of isolating themselves and must do more to reach out to other communities and take part in community life.

Oldham councillor Arooj Shah said the local authority is doing its best to implement Prevent — she is also part of Prime Minister David Cameron’s Community Engagement Forum on counter-extremism — but she disagreed with some of his language.

Councillor Shah said: “We need to challenge the idea of Muslims as a suspect community. People become genuinely frightened to speak out. Prevent objectives are right, but at the moment the delivery is not effective. Here in Oldham I’m proud that so many Muslims are constantly doing their bit in opposing extremism.”