You are Here: Home » News » Outcry over plan for green space

Outcry over plan for green space 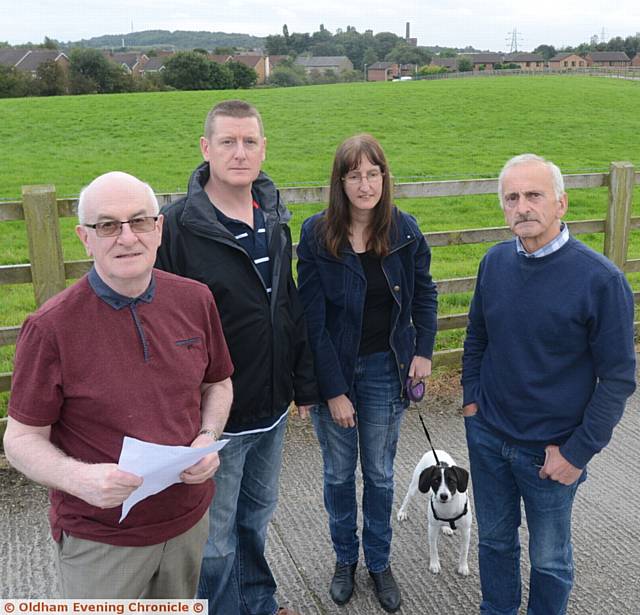 A CAMPAIGN has been launched to prevent the "attack" on an outstanding green space in Shaw.

Residents with major concerns about plans to build 125 houses at Cowlishaw Farm Abattoir have formed a committee to fight for the land.

About 300 objections have been lodged against the proposals, backed by the set-up of Keep Cowlishaw Green by residents living near to the site.

Plans include demolishing the abattoir and a swathe of green space deemed "the last green space in Cowlishaw" to make way for the housing.

Co-chairman Ken Watson, of Greencroft Meadow, Royton, said: "Anxious residents set up this campaign to strongly challenge this application and to defend this attack on a special open green area between Royton and Shaw.

"We want hundreds to submit objections. The application has taken almost 12 months to surface despite major concerns. This outstanding green space, partly occupied by Fitton's abattoir, would be lost forever."

The application will go before Oldham Council bosses on September 21, when the committee hopes to see wide representation from objectors.

Mr Watson said: "We want as many residents as possible to lodge objections and attend the planning meeting to demonstrate their opposition."

Vice-chairman Tony Faulkner said: "Why do we need this relentless programme of house building which will swallow up all our green spaces?"

The group has distributed flyers to surrounding streets over the past two weeks to encourage residents to contact the council with their concerns.

Sheina Burns, of Longfield Road, said: "If this is approved you will be taking away the last of the remaining parts of green and pleasant land."

Consultation events were organised by Chorlton Planning, on behalf of the applicants, to gauge public opinion and to encourage response.

Concerns were raised over flood risk, drainage, loss of open land, the effect of increased traffic and vehicle access.

Alan Chorlton, of Chorlton Planning, said: "The main concern was the effect that traffic generated by the development would have on the Cockermill Lane, Shaw Road junction. The views raised by residents and other consultees were taken into account and the proposals revised."

Chorlton Planning on behalf of applicants Mr and Mrs Fitton said in the proposals: "The development will have little effect on the local distinctiveness of the area, other than to improve it."