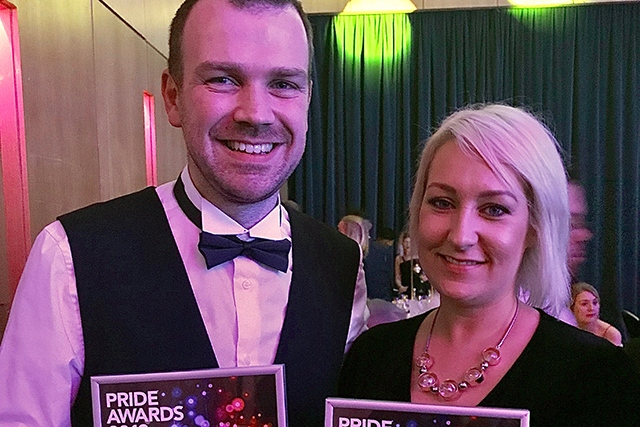 NWAS, accompanied by Cornerstone, which is a member of Greater Manchester Chamber of Commerce, received the two top accolades at the Chartered Institute of Public Relations (CIPR) 2018 North West Pride Awards.

The two gold awards were for categories of Healthcare Campaign and Low Budget Campaign.

David Wadsworth, managing director of Cornerstone, said: “We are delighted with the gold awards.

"We’ve worked with NWAS for eight years and have built a deep understanding of their organisation and formed a strong working partnership with them.

"Our teams work seamlessly together, which is reflected in the successful results of our campaigns.”

NWAS Head of Communications Julie Treharne said: “I am delighted that the campaigns have been recognised at such a prestigious award ceremony.

"We faced tough competition in each category but the creativity and passion of our in-house team and Cornerstone really shone through.

"These campaigns aim to spread key messages to the public about really important topics and our long-standing partnership made it easy for us to get these across in original and engaging ways.”

The first campaign was called Make The Right Call. It was designed to reduce the number of 999 telephone calls regarding minor cases.

The aim was to free-up ambulances for life-threatening emergencies and to encourage the public to think twice before calling 999. It raised public awareness of alternative advice and treatment for minor problems, such as self-care, GP surgeries, pharmacies and walk-in centres.

Other material included printed factsheets and posters, and an email campaign.

‘Organic’ social media reached over 572,600 people while paid-for adverts reached almost 268,000 people. A video reached a large audience, a micro-website generated almost 3,000 page views with over 500 viewers returning to the site for more information and support.

The second campaign, called Hero Next Door, was delivered on a low budget to recruit more volunteer Community First-Responders.

NWAS trains volunteers to respond to incidents in their local community where first-aid and more advanced training is required to help the patient before ambulance crews arrive.

The objective was to gain 50 new volunteers across the region, in rural and urban areas.

Whilst the target may seem low, the process of becoming a first-responder is quite rigorous, which normally dissuades many people from applying.

The campaign was research-backed through focus groups and telephone interviews to ensure detailed insight into why volunteers sign-up and the benefits they gain.

This was then used to craft messages to the target audience to ensure increased engagement and conversion.

With illustrations, graphic design and content from Cornerstone, the campaign was primarily on social media, websites and online adverts, supported by some public relations activity and outdoor banners on ambulance stations

The Community First-Responder microsite had 2,700 unique visitors after the launch of the campaign in August 2017 with over 10,000 page views, a rise of 58 per cent.

The ambulance service answered 716 email enquiries, of which 558 were in the target recruiting area.

This was an increase 1,700-per-cent compared to a previous emailing period.

The campaign was so popular that NWAS had to put in on-hold for a second phase.

Within two months, NWAS had 23 completed Lancashire volunteer applications, 19 for Greater Manchester, 17 for Cumbria and nine for Cheshire, with more due.