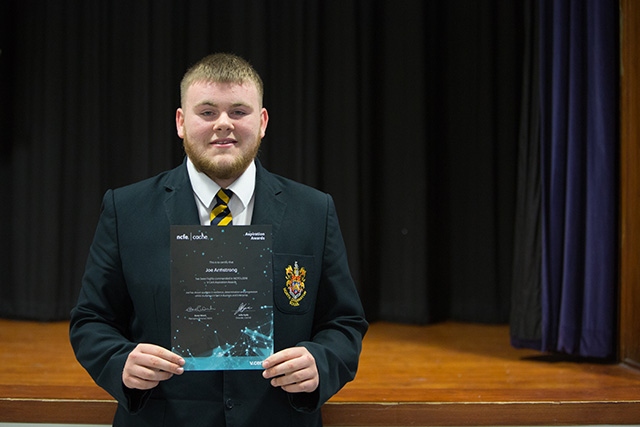 Dedicated North Chadderton school pupil Joe Armstrong has won a highly commended prize at the 2018 V Cert Aspiration Awards, a new initiative celebrating learners with big aspirations who are using V Certs to help them reach their goals in life.

Joe was nominated by his teacher, Amanda Marsh, who felt that he should be recognised for his commitment to his school work, specifically his V Cert in Business & Enterprise, despite significant health issues.

Joe was often in and out of the hospital and while that might see other learners fall behind, Joe is driven by his desire to one day own his own business.

Understanding that achievement is more than just getting the best marks in exams, the Aspiration Awards asked schools and teachers to consider a range of criteria, including achievement rates, innovative work and overcoming personal challenges.

Ms Marsh said: “Joe has had a really tough time over the past 12 months, which makes it hard to stay focused while at school.

"He’s also had a lot of absences due to his ongoing illness.

"We’re so impressed with his resilience – being determined to succeed and not letting the illness get in the way of his achieving his V Cert.

"In particular, the day we had the external assessment he was having a bad day, but despite this continued with his exam and managed to pass.

"He should be an inspiration for others.”

To help Joe with his school work and to recognise his bravery and determination, he received an iPad and a certificate from NCFE.

This was presented in an assembly at school with his parents present.

His mum said: “Thank you so much to NCFE for awarding Joe this – he’s never won anything before and his self-esteem has really improved as a result.”

Esme Winch, Managing Director at NCFE, said: “We were overwhelmed by the quantity and quality of submissions for the V Certs Aspiration Awards and would like to pass on our sincere congratulations to all of the learners who were nominated.

"At NCFE we believe in the importance of technical education and to see the commitment from these learners to overcome the barriers they face is fantastic.

"We wish all nominees the very best for their futures and can’t wait to hear about all of the great things they go on to achieve in what we’re sure will be very successful lives and careers.”