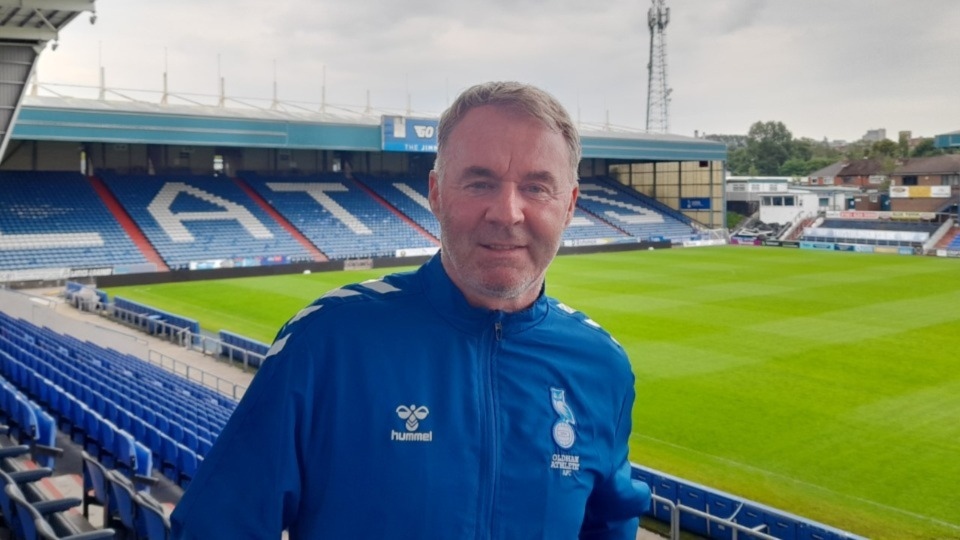 Latics team boss John Sheridan saluted the news of the Rothwell family’s takeover today, and has promised to do his utmost to bring the good times back to Boundary Park.

Speaking exclusively to the Chronicle at today’s press conference, Sheridan clearly has success in his sights in a bid to repay the club’s vociferous, but long-suffering, supporters.

Sheridan, whose side kick-off their new National League campaign at Torquay on Saturday week, said: “It’s great news for everyone involved with the club, and it’s been great to finally get the news out there in the open.

“I’m particularly delighted for the supporters after everything that’s been going on here over the past couple of years.

“It’s a massive boost, and with Darren and Joe (Royle) coming into the club too – they know this club inside and out and they know what’s required.

“All we can do is look forward now.

“You can see what it means to the fans by just looking outside – they’re buzzing.

“Frank’s an Oldham person, his fondness for the town is clear.

“He’s got friends on the council, in his business – whether he knows too much about football, though, I don’t know!

“But he’s seen the support and the potential here, and of course I’m hoping there’s lots of good times ahead.”

Sheridan is a vastly experienced campaigner as player and manager, however, and he knows full well that the top tier of non-league will be far from a walk in the park.

He added: “There’s lot of really good teams in there, and lots of long journeys ahead.

“Chesterfield, Notts County, Wrexham, even Torquay next weekend, it’s going to be difficult.

“I think Oldham will be a big scalp for a lot of teams too.

“Dorking are a perfect example – they’ve had two successful seasons so they’ll be well up for our first home game here.

“Teams will enjoy playing here, it’s a big stadium and a great pitch, but it’s up to us to be ready for it.

“I know there will be pressure, but I don’t feel that.

“I’m looking forward to the season now – the more fans in the stadium the better.

“It’s been tough for the players at times over the past year or so, but they and everyone else here can see the potential there is here to do well.

“It’s up to us to try and hit the ground running next week now.

“The new board have left me to it in terms of recruiting new players so far, though.

“I still feel we need three or four players, and it’s important we look at the loan market, but as soon as I’ve mentioned a player I like recently, they’ve said ‘you’re in control, John’.”