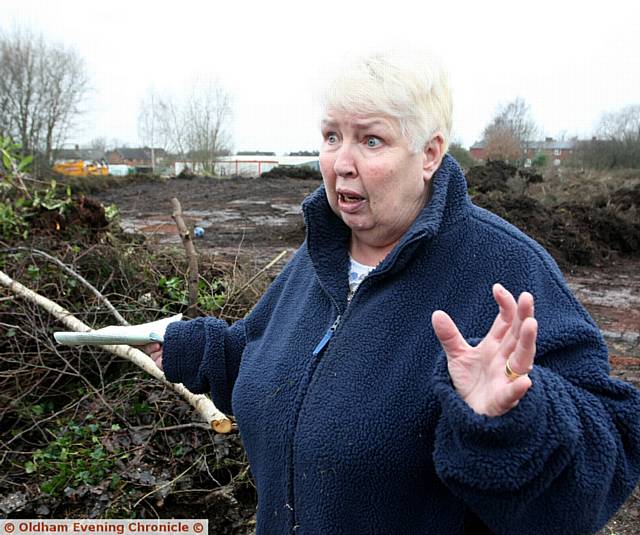 CHRISTINE WISE gets her point across

OLDHAM Council has suspended work at the back of Whitebank Stadium amid claims there are live badger setts in the area.

Work to transform the main grass pitch into a new all-weather 3G surface and install a new small training pitch did have the green light.

But a stand-off between builders and local resident Christine Wise last Thursday saw the work put on hold.

When planning permission was approved in November, the findings of a survey stated there was no evidence of a live badger sett.

However, Christine, of Elm Road, disagreed with the assessment and as work began on the Monday she contacted the council to relay her concerns. By Thursday lunchtime, Christine, believing there was no evidence of work stopping, alerted police and the Lancashire Badger Group - as badgers and their setts are protected.

Then she took matters into her own hands by standing in the way of the diggers.

At the same time, a council officer and a badger expert from Greater Manchester Ecological Unit (GMEU) were attending the area to carry out routine compliance work.

The GMEU representative spoke to Christine and shared with her the findings of the survey which said there are no live badger setts in the area. Yet despite this, the council has agreed to suspend work in the interest of animal welfare.

And it has also invited a representative of the Lancashire Badger Group to attend a meeting on the site as soon as possible.

A distressed Christine said: "There are badger setts on this field.

"The foxes are running for their lives and the badgers are being crushed.

"They have done a massive amount of damage to this sett. The destruction that has occurred, I can't describe it.

"I don't know if the badgers are dead or alive."

She added: "We have got to do something, if we don't do anything they will die."

Councillor Jean Stretton, leader of Oldham Council, said: "An Oldham Council officer and a representative of the GMEU attended Whitebank Stadium this afternoon.

"A badger expert from the GMEU was on site carrying out routine compliance work.

"While there he spoke to the resident and shared the findings of a previous survey that stated there was no evidence of a live badger sett in the development area.

"However, in the interests of animal welfare we told the contractors to suspend work and we have asked a representative of the Lancashire Badger Group to attend a meeting on site as soon as possible to reassure the resident and so work is not unduly delayed."