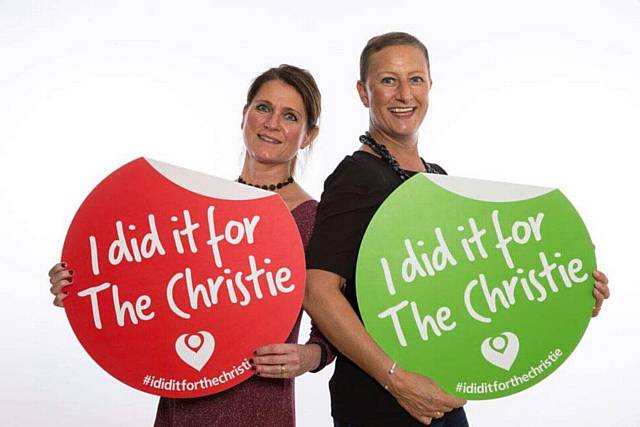 A DIGGLE mum has battled through major surgery and chemotherapy to complete a year of gruelling challenges with her pal to raise cash for The Christie.

Jo Taylor (48) was diagnosed with secondary incurable breast cancer three years ago and has been combining fundraising with promoting health and fitness to fight the disease ever since.

At the end of 2015, her friend Jo Cunningham told her she had a plan for them both to embark on a series of physical challenges in support of The Christie, where she undergoes her treatment every three weeks.

Throughout it, Jo not only competed in several running events and the 62-mile Manchester to Blackpool bike ride on the back of chemotherapy treatment, she also underwent an operation to remove and rebuild her sterum where the cancer was first rediscovered.

"I warned Jo I might not be able to do all the challenges, but I only had to pull out of a couple.

"There was a 7k a few days after one round of chemo which I decided not to do, then I just decided to turn up on the day.

"It would just depend how I felt, but I managed most of them.

"Jo is amazing. She's been so supportive and put her heart and soul into doing this. She's a lovely friend."

The mum of two says she's "living with" her incurable cancer, which is also in her shoulder bone.

She says her website, 'After Breast Cancer Diagnosis', and her blog keep her busy and has launched an Exercise Retreat pilot scheme, when cancer sufferers from all over the UK descended on Diggle for a weekend of running, cycling and Nordic walking.

"Jo Taylor, who is a patient here, has been doing the Manchester to Blackpool bike ride for us since 2014. Her running, cycling and cross-fit partner Jo Cunningham came up with the idea of them organising different fundraising events together in 2016. Between them, they raised £9,655.00 and since 2015, Jo has raised £15,508.71. Jo is passionate about supporting research into secondary breast cancer at The Christie and also runs a great website to help and support other patients.

"We are hugely grateful to both the Jos for their amazing support for our charity."

The Two Jos are plotting challenges for 2017. Their donation page is at bit.ly/2l7GBg5