You are Here: Home » News » James victim of gang attack 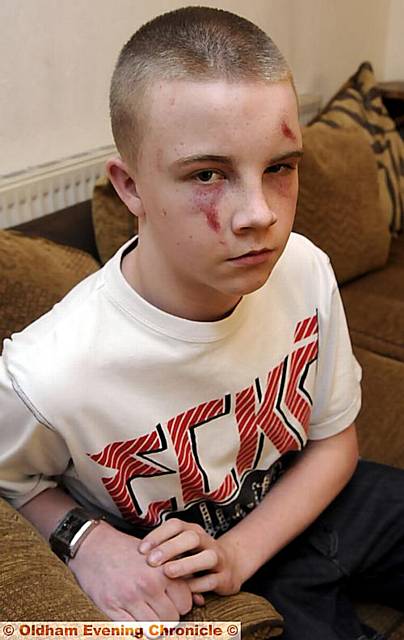 A TEENAGER needed hospital treatment after he and two friends were attacked by a gang of around 20 Asian youths.

James Howard (14) had his head stamped on and suffered a broken nose, two black eyes, and cuts to his head, arms and hands, in the attack shortly after 7pm on Sunday. His two friends, aged 14 and 23, were also taken to hospital, where they were treated for facial cuts and abrasions.

The injured teenager’s mother, Angela, said: “James was battered senseless. They stamped on his head and he is an absolute mess.

“He looks like he’s gone ten rounds with Mike Tyson and he’s absolutely devastated. It’s frightened him to death and I don’t think he’ll ever go out again.”

The incident happened in Victoria Street, Chadderton, as James rode his bike home from a local newsagents, flanked by his two friends on foot.

Mrs Howard (34), said the attackers made racist comments and left footprints on her son’s head and back, and stole his bike, his mobile telephone and his shoes.

She said: “They could have killed my son. If I thought my child was capable of doing something like this I would take them to the police myself.”

The family have lived in Chadderton for 16 years, and Mrs Howard and her husband, Joe, also have two other children, aged eight and 12.

A shopkeeper took the boys in, and James called his father, who took the three straight to the Royal Oldham Hospital.

Doctors wanted to keep James in overnight, but the shocked youngster wanted to go home to be with his family.

She said: “He was just in the wrong place at the wrong time. The people who attacked him are not children and something needs to be done before something goes drastically wrong in Oldham.”

The youths were all aged around 20.

Police said they confronted then chased James and his friends, and a fight broke out when they caught up.

They said one of the offenders was heard to make a racist remark.