You are Here: Home » News » Clegg: Lib-Dems get ‘positive response’ 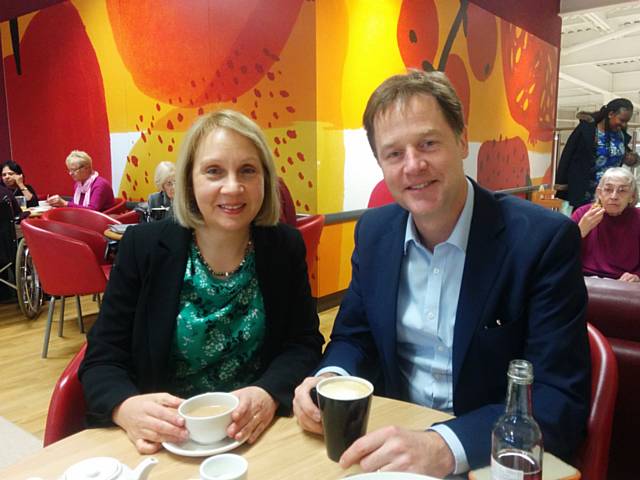 He said: “I have known Jane for a long time, she’s been an absolute force in the Liberal Democrats for many years and knows this part of the world extremely well having worked here in the NHS for most of her career.

“I certainly think in Jane we have a wonderful candidate, I’m a huge, huge fan of hers. I certainly hope by next Thursday it will be much clearer in people’s minds what the Liberal Democrats are all about and who Jane Brophy is.”

Mr Clegg spoke of the disappointment his party faced at the General Election last May — the Liberal Democrats went from 57 parliamentary seats to only eight — but said they are now rebuilding under new leader Tim Farron.

He added: “As a party that took a real knock in the General Election this by-election gives us the opportunity to get out and speak to people again, explain who we are.

“I think Jane’s getting a really positive response on the doorstep and I am very confident that she is going to do a lot better than we did in the General Election.

“We have got to rebuild like any party, like any individual that takes a hard knock. You have got to lick your wounds a bit but move on and dust yourself down.

“The party’s finding its zeal and fighting spirit again. In a constituency like this where we haven’t traditionally been competing at Westminster level we still have scores and scores of activists coming into our HQ and knocking on people’s doors.

“It shows that, as much as our opponents might suggest that the Liberal Democrats have been put out of action, we’re mounting a fight back. We’ve had a massive influx of new members.”

He said: “He’s just delaying it by smuggling the cuts into Universal Credit. I think we played an important role and a leading role in firstly, identifying the problem and then opposing it unambiguously.

Mr Clegg added: “I think in many ways Oldham and Royton is a classic part of the country that doesn’t do well out of a Conservative-led government and Jane has been very outspoken on that.

“Jane has found on the doorstep that people are responding to her message and what she stands for. She’s getting a really good response.”