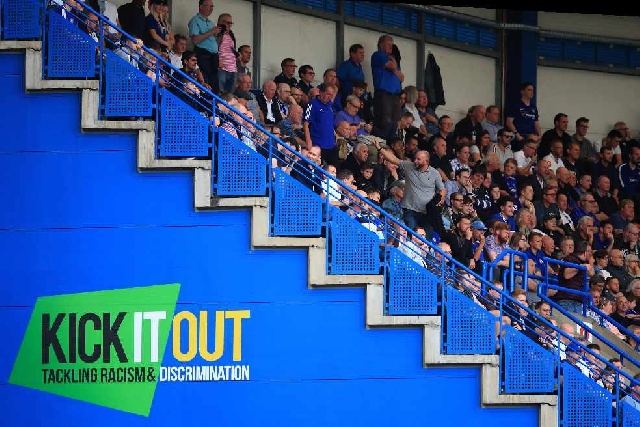 Kick It Out against racism

The club sacked the 32 year old defender after he posted a message relating to the Islamic holy month of Ramadan in a players' WhatsApp group.

Gerrard, now at Carlisle United, was given a warning about his future conduct and made to attend an education course, something Latics at the time thought was "lenient" and not dealing with the issue appropriately.

A Sky Data poll for Sky Sports News showed that 86% of supporters have witnessed racism at a match at least once, with the figure rising to 93% among supporters from a Black Asian Minority Ethnic (BAME) background.

One in five (20%) witness racism - including gestures, chants and abuse - often or every time they attend a match. That figure rises to more than one in four (26%) among BAME fans.

Over 1,000 football fans - UK adults who attend multiple professional or semi-professional football matches each year - took part in our survey.

Last year Oldham East and Saddleworth MP Debbie Abrahams was joined by other MP's in calling for racism to be kicked out of the sport.

The issue of racism in football was brought to the fore in December when Manchester City player Raheem Sterling was the victim of alleged racist abuse during their match against Chelsea at Stamford Bridge.

Police are investigating allegations of racist abuse directed at Liverpool striker Mohamed Salah when he played against West Ham, and Millwall is looking into alleged racist chanting before violence flared last month.

One in three (33%) has had racist abuse directed at them personally. That figure rises to 71% among fans from BAME backgrounds - and of those almost one in five (18%) said they are personally abused often or every time they attend a match.

There were low levels of passing on information about such incidents to authorities. Only 29% said they had reported a racist incident they had witnessed and, of those who did, 74% were not sure what, if anything was done about their complaint.

Tomorrow night, @SkySportsNews will air the first in a series of special programmes on the challenges of racism in football and reveal findings of an exclusive poll, which has been completed by fans who regularly attend matches. pic.twitter.com/l9IyllEBxS

She has called for a summit bringing together all stakeholders from the game to discuss the issue. She hopes this will happen later this month.

'Tackling Racism' will be broadcast on Sky Sports News tonight (Monday 11 February) at 7pm. A panel of guests including former England striker Emile Heskey will discuss the Sky Data poll findings and the programme will also hear views from West Ham's Michail Antonio, the PFA, Premier League, Show Racism the Red Card and others.